It is every parent’s dream to know that their children are safe and sound wherever they are, and news of a school fire can be very devastating.  In 2019, Uganda registered a total of 12 school fires across the country with 10 occurring in the Central region alone. Let’s break down these scenarios in order of occurrence.

18th February – Fire burnt a dormitory at St. Anthony Roman Catholic Primary School in Nakasongola District, destroying property worth millions. According to the school head teacher, Ms. Allen Musoke, by the time the dormitory caught fire, the pupils had gone for morning lessons at about 5: 30 am and no one was injured. The dormitory was housing boys in Primary Five, Six and Seven.

21st February – Fire gutted a dormitory at St Jude Primary School in Nakasongola District and claimed the life of Favor Itaro, a Primary One pupil. Itaro died of suffocation, according to a postmortem report released by police. Seven pupils were injured. District authorities closed the school for one week. The ill-fated dormitory had burglar proof windows, which could have made it difficult for the pupils to escape the fire.

24th February – A boys’ dormitory at Sembabule Parents Primary School was destroyed by fire when pupils were attending evening classes. The affected dormitory was housing 35 boys and a lot of property was lost.

4th April – Property worth Shs800 million was destroyed in a dormitory fire at Forest Hill College Mukono (State minister for higher education JC Muyingo’s school). The boys’ dormitory was housing at least 225 students of senior three to senior six. Authorities say no one was hurt by the fire that destroyed students’ mattresses, books, jerrycans, clothes and money, among others.

27th May – Fire gutted a boys’ dormitory at Kisoso Parents Primary School, a day after pupils reported for second term, destroying some property including suit cases which involved pupils’ belongings and beddings. According to the Southern Police spokesman Paul Kangave, the incident happened at around 7:30pm on Monday. It is suspected that the fire could have been a result of a wrongly installed solar panel system at the dormitory, according to Charles Nsereko, the school director.

Mr. Kangave said the dormitory accommodates about 160 pupils, but by the time of the incident, only 60 had reported and none were injured.

20th July – Fourteen students were injured in Nakaloke Islamic School in Mbale District after a fire suspected to have started from one of the dormitories near the mosque reduced properties to ashes before it was contained by the Police Fire Brigade. Textbooks, classroom work, mattresses, case boxes, clothing and utensils, belonging to 50 students were all destroyed.

25th July – students of Namirembe Hillside High School in Kitetika, Wakiso District lost property worth millions of shillings after a fire gutted one of their dormitories. 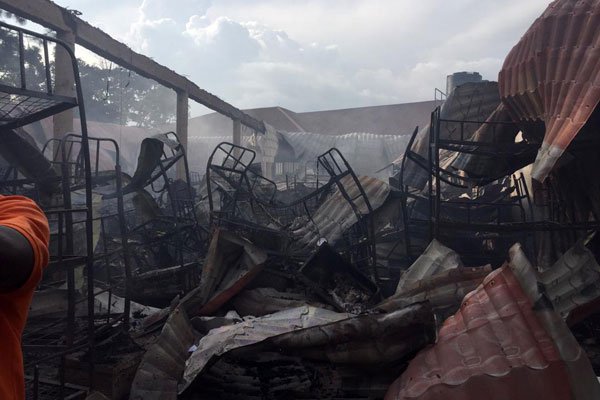 18th September – Pupils of Happy Times SS, Masajja in Wakiso District lost a lot of property when fire gutted one of the dormitories.

21st September – Just three days later, another fire gutted a dormitory at Kyotera Infant and Primary School. The fire started at the door of the boys’ dormitory and quickly spread to the rest of the facility. No lives were lost but pupils’ belongings such as mattresses, shoes, suit cases, clothes and books were burnt to ashes.

This alarming rate of fire outbreaks calls for more caution from school authorities to always ensure that they have working firefighting equipment, and that learners have the knowledge of how to operate it.