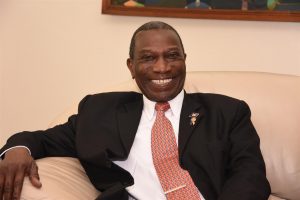 Rotary International is to establish a polio fund in memory of the late President-Elect Sam Frobisher Owori who died unexpectedly on 13th July in Dallas U.S.A due to complications from surgery.

Addressing the press at Grand Imperial hotel regarding the burial arrangements for Owori, the past District Governor of Rotary Uganda and Tanzania, Stephen Mwanje said the fund is a form of appreciation for Sam whose leadership saw the number of Rotary clubs grow from 9 to 89 in 29 years.

Mwanje says the fund is a sign of Rotary’s commitment to the eradication of Polio in the world as well as a celebration of Owori’s incredible passion to make a difference in the lives of others especially the less privileged.

Owori’s body arrives in the country from the United States of America on Monday and his body will on July 26, be taken to Parliament for a special sitting in his honour.