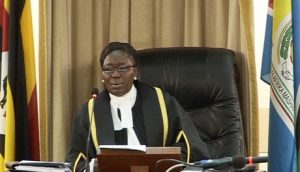 The speaker of parliament Rebecca Kadaga threw out accusations against foreign minister Sam Kutesa. Saying that it’s premature for Parliament to investigate the bribe case against the foreign Affairs minister

Kutesa was named in US court documents as having allegedly received a $500, 000 (about Shs1.8 billion) bribe to help a Chinese energy company secure business advantages in Uganda, including the potential acquisition of a Ugandan bank.

Kadaga while ruling on the matter said that they should wait for the outcomes of proceedings in New York before Parliament takes action.

However, Karuhanga protested the speaker’s ruling on the matter saying that Kutesa could influence the investigations against him.