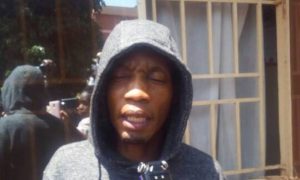 Police Spokesperson, Emilian Kayima, has denied the the allegations that the force had assigned Brian Kirumira police guards and the two officers who were part of Kirumira’s security detail attached to Kabalagala Police Station were arrested in connection to the incident.

“There is no deployment as to the effect of guarding Bryan White. Whoever was involved will have to explain how he or she got there. Some are already in custody,” Kayima said.

However, it is still uncertain why Police had remained silent on the matter until then since Kirumira has been moving around with the police guards for some time. He once appeared in a city tabloid jogging under the protection of six heavily armed personal believed to be police officers.

Since he has never made a formal request for security, “I am not sure that the police simply looked on. His action should be a lesson to all those socialites who love to get VIP treatment. It’s also a lesson to security personnel that are possibly into such habits,” Kayima said.

According to Kayima, they are hunting for the remaining officers who have been moving with Kirumira as well as guard his homes.