A Russian AN-12 transport plane carrying approximately 9 tons of gold blocks, worth 368Million dollars, lost a third of its cargo as it was taking off from the Yakutsk Airport in eastern Siberia on Thursday. 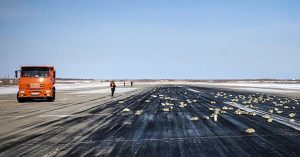 According to local reports, the plane’s hatch door snapped during liftoff. The bars of doré, a semi-pure alloy of gold and silver, dropped out of the aircraft and onto the runway.

The airport’s press service told Russian news agency Tass the technicians may have failed to properly secure the cargo. After the incident, various pieces of the plane’s fuselage were reportedly found on the ground near the runway—along with dozens of gold and silver bars.

A police spokesperson said five crewmembers were on the plane and none were hurt in the incident. He confirmed that a “total of 172 gold bars weighing 3.4 tons” dropped out of the plane, reported Tass.

In an official statement, Yakutsk Airport said the plane belonged to Nimbus Airlines and confirmed an investigation is underway to determine the cause of the incident. After the bars fell, the crew members immediately landed the aircraft in nearby Magan Airport and returned to Yakutsk to gather the lost gold. Yakutsk is in a poor mining area, reports ABC News.

The cargo belonged to Chukotka Mining and Geological Co., a private company based in Anadyr in Russia and mostly owned by Kinross Gold Corp., a Canadian-based gold and silver mining company.

Stanislav Borodyuk, a representative of Kinross, confirmed that the doré bars have since been collected and safely stored.

“An internal review is underway with the transport company. I wouldn’t exclude the possibility that, at the minimum, more stringent requirements will be introduced for cargo transports,” he told Lenta.ru, a Moscow-based news agency.

The crew was headed for Krasnoyarsk, on the way to Kupol Gold Mine, a gold and silver mine in the Bilibinsky District of the Chukotka Autonomous Okrug of Russia.