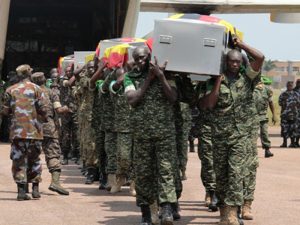 Soldier carry the remains of their lost Comredes. Ugandan officials have said only four soldiers were killed in the attack when Al-Shabaab Islamist extremists attacked their base on Sunday. Internet Photo

Alshabab attacked and killed at least four Ugandan soldiers at the African Union Mission to Somalia (AMISOM) base in Somalia on Sunday.

The attack happened on April 1st 2018 at Quoryole, Bulomareer and Golwein in Lower Shabelle region in Somalia.

Since the attack, the media has been awash with different statistics with some reports suggesting that 8 soldiers died whereas others have up to a tune of sixty soldiers.

The Shadow Minister of Defense who is also the Member of Parliament Kilak  County North Gilbert Olanya raised the matter before parliament noting  that their investigations indicate  that 10 UPDF soldiers have died and 14 are injured.

The army spokesperson Brig .Richard Karemire told the media that four Ugandan soldiers had died, and only six were injured, while UPDF managed to kill 22 Alshabab Militants, although international media agencies reported higher figures of 46 and 59 as the number of dead UPDF soldiers.

On Tuesday, President Museveni revealed that actually 8 soldiers had been killed, and that UPDF managed to kill 36 alshabab terrorists.

MP Gilbert Oulanyah  said that  the death of these soldiers is raising speculations over the motive in the secrecy of this information.

Oulanya wanted to read out the names of the deceased who he thinks their number is slightly higher from that quoted by government and those considered injured but he was stopped by the deputy speaker Jacob Oulanyah.

He asked for Government to give the names and details of the dead and injured without concealing anything,

He also asked government to explain the plans it has of bringing the Ugandans soldiers back home since it was considered last year to withdraw them from Somalia.

While responding to the matter raised by mp  Olanya ,the minister of Defense Adolf Mwesige told parliament that  130 Alshabab militants were killed by AMISOM forces on the day of the attack, while only 8 UPDF soldiers died.

He committed himself to give a comprehensive statement over this matter on Thursday 5th April 2018 before parliament. Mwesige explained that four soldiers had died on the spot, while four died later from the injured six. He also said the UPDF will stay in Somalia as it has been agreed upon in the United Nations.