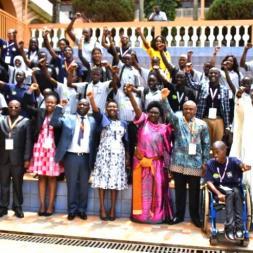 During a sitting chaired by Deputy Speaker Mary Namaya(Malawi) a number of delegates said that many of the reasons youth engage in substance abuse is because of the relaxed approach of most of the governments towards the vice.

Halima Abu Ali from Nigeria said that people take these substances because of easy accessibility which stems from relaxed laws saying, “Teenagers are hardwired to experiment new things that they have no idea of, so when the opportunity presents itself most of them utilize it.” Halima also said that African states should tighten present laws on alcohol and drug abuse to make sure that the distribution of drugs is limited.

Canjamalay Pouvarajen (Mauritius) said that many countries have drug acts that need to be revised saying that many drugs are manufactured from simple products like sulphuric acid that are legally imported thus advising governments to set up strict guidelines on how these products are utilized. Pouvarajen also said that governments should have strict laws empowering security authorities to weed out anyone engaged in smuggling and producing drugs.

Chelsie Maggie Owino from Kenya advised that African governments should create agencies to curb the abuse of drugs and alcohol.

Charles Ssendaula from Uganda said that governments should put up strict laws governing the promotion of alcohol noting that adverts in media are inappropriate and encourage the youth to use alcohol because some depict as great tasting and associate it with success.

The discussion was based on statistics that 37,000 youth in Africa die from drug abuse and alcohol related illnesses.
The Youth Parliament passed a resolution to combat drug and alcohol abuse which was identified as one of the issues faced by youth and as a topic for discussion.