This, they say can be achieved through a range of interventions including increasing sex education mostly by parents and in schools, addressing the high youth unemployment rates and provision of youth friendly reproductive health services 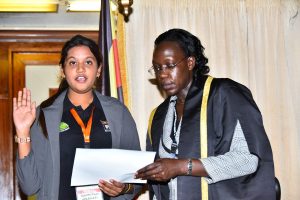 A Delegate to the 4th Commonwealth Parliamentary Assembly(Africa Region) Youth Parliament being sworn in.

This was during the ongoing 4th Commonwealth Youth Parliament taking place in Kampala, Uganda where the young leaders blamed the increasing teenage pregnancies and HIV/AIDs infection rates among young people on poverty, lack of government commitment and limited awareness.

Shariff Imraan Swaleh representing Kenya at the event said society puts pressure on girls: “It is not the girl’s fault alone that she gets pregnant,” stressing further that sex education should be given to both boys and girls.

During the same event, Shephard Simukonda, who was representing Zambia advised governments to develop internship programmes as a means of keeping the youth engaged while enabling them acquire skills for the job market. Shephard further suggested that this would keep youths busy, leaving them with no room to engage in risky behavior while governments address the unemployment problem.

Yuhai Nyambusya, also representing Zambia, noted that stopping young people from engaging in early sex is difficult, but early pregnancies and HIV/AIDs can be prevented through provision of reproductive health services. He further said that the youths also need to express willingness to change saying, “If the youth are not ready to change, no amount of government efforts will change them.”

Florence Aiyo, representing Uganda urged parents to accept that times have changed and complement government efforts by guiding and counseling their children, because the children are now exposed to so much pornography.

Hellen Mushi Bariki, who represents Tanzania underscored the importance of involving religious leaders in addressing teenage pregnancies and HIV/AIDS saying that Religious leaders ought to teach youth what religion says about sex.

Godfrey Mugisha (Uganda) reiterated that unless governments show commitment, issues affecting youth will not be addressed.