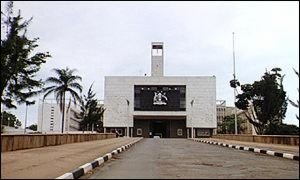 The entrance of the Parliament of the Republic of Uganda

Parliamentary Commissioner and Dokolo Woman MP, Cecilia Atim Ogwal, has asked African youth to reject foreign cultures and traditions including homosexuality as they prepare to take up leadership positions on the continent. Speaking at the opening of the 4th Commonwealth Parliamentary Association (Africa Region) Youth Parliament held at Hotel Africana in Kampala, Hon. Ogwal warned that accepting the foreign cultures would be selling the future of Africa.

Before being elected as Parliamentary Commissioner, Ogwal was the Opposition Chief Whip and one of Uganda’s five representatives to the Pan African Parliament in South Africa and the Africa, Caribbean, Pacific and European Union Joint Parliamentary Assembly.

While standing in for the Speaker of Parliament Rebecca Kadaga at the launch of the 5 day event, Ogwal noted that as a member of the two international parliamentary bodies she rejected arguments by South Africa and European countries that homosexuality was an expression of rights of an individual, yet they rejected polygamy in their countries.

The 4th Commonwealth Parliamentary Association (Africa Region) Youth Parliament has attracted participants from Botswana, Ghana, Kenya, Malawi, Mauritius, Nigeria, South Africa, Tanzania, Zambia, Namibia and hosts Uganda.
The Youth Parliament is held under the theme: Securing a better future for Africa: Role of the Youth. After the opening ceremony, other sittings will be held in the Chambers of the Parliament of Uganda.

She further said African countries are invaded by foreign cultures and traditions and that Foreign Cultures are being forced on the Youth in Africa and it is up to them (the youth) to accept or reject the cultures, and when the youth come to leadership positions, they must know what is good and what is bad.

Ogwal said that the theme of the Conference was in line with the African Union Agenda 2063 which seeks to redirect the continent’s energy towards the pursuit for integration, prosperity, peace and stability, cultural identity and people driven development.
She encouraged the youth to be at the forefront of formulating and implementing policy since they are the majority in their countries.

Ogwal also asked delegates to ensure that practices in society that affect youth and women are eliminated.
Masindi Woman MP Jalia Bintu, the Chairperson of the organizing committee of the Fourth Commonwealth Youth Parliament said that the youth delegates are expected to analyze issues and challenges that cut across the member states and come up with resolutions providing solutions to them.

James Ebitu, the Director Social Protection in the Gender, Labour and Social Development ministry, challenged the Youth to ensure that the resolutions they make address and call to action all stakeholders to prioritize the needs of the youth.
Ebitu said that focus should be on education and skills development, job creation in a sustainable job environment in emerging industries as well as strengthening civic participation and leadership.

The National Female Youth Member of Parliament Anna Adeke Ebaju, urged the youth delegates to take up management positions available at all levels to prepare them for later leadership at national and regional levels.
Adeke said that her positions as Guild President at Makerere University and later Speaker of the Students Council had prepared and given her experience to serve as Member of Parliament at the national level.
She said that despite their numbers, few or no governments had charged the youth with power to make decisions on especially issues that affect them. She urged the youth not be afraid to take up leadership positions at all levels, in Church, sports or the community because Africa needs the youths experience.

In their first session, the Commonwealth Youth delegates will debate issues regarding Youth Unemployment, Alcoholism and Drug Abuse, and harnessing Youth in Leadership. Their other debates throughout the week are to focus on Teenage pregnancy and HIV/AIDS, Youth and Social Media among others.