“We will also deliver tree seedlings to youth and women groups around the country so as to promote afforestation,” said Muasmali. 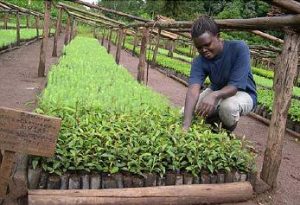 Members of Parliament have tasked officials from National Forestry Authority (NFA) to explain the circumstances leading to the reduced forest cover and rampant deforestation in the country.
Officials from the NFA led by the acting Executive Director Paul Musamali were meeting MPs on the Natural Resources Committee now considering the Ministerial Policy Statement for financial year 2018/2019.
MPs expressed concern over the restoration of degraded natural forests which NFA officials attributed to the unexpected dry spell in 2017.
Hon. Thomas Tayebwa (NRM, Ruhinda North County) raised queries on the way decisions to remove boundaries from forest land were taken noting that some investors were taking advantage of this to set up structures in forest reserves.
Tayebwa encouraged the NFA officials to help locals in their constituencies to set up nursery beds given that distribution of tree seedlings had not made much progress.
Aswa County MP Hon. Reagan Okumu advised the NFA officials to take on corporate social responsibility in a bid to improve their image with the public especially those living near forests.
“NFA makes money, so you should consider supporting locals with bee-keeping projects because they can co-exist with forests,” Okumu said.
Paul Musamali assured members that the Forestry Authority was engaging Ministry of Finance to support the setting up of a Tree Fund that would help increase the forest cover countrywide.
“We will also deliver tree seedlings to youth and women groups around the country so as to promote afforestation,” said Muasmali.
He added that it was upon Government and Parliament to decide on whether or not to degazette forests noting that public engagement and education was key for efficient management of forests.

MPs also tasked the NFA officials to work hand in hand with Uganda Wildlife Authority to check on wild animals that roam from forests into gardens and destroy crops.

The NFA officials also presented a list of unfunded and underfunded projects for the financial year 2018/2019. The items include management of central forest reserves, raising and supply of seeds and seedlings, human resource services as well as plantation management among others.