Rule 30 (b) states that, “A member who wishes to contribute to any issue shall stand from his/her seat and shall only speak after being recognized by the Speaker.” 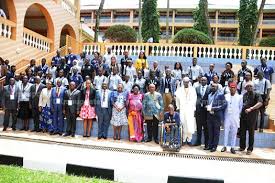 The 4th Commonwealth Youth Parliament which took in Kampala passed five motions that they were debating over.

The Leader of the House, Hon. David Milambe (Malawi), who read the motions on Tuesday, 17th April 2018, said the resolutions would be presented for adoption in the next Commonwealth Parliamentary Association (Africa Region) Annual General Meeting.
Milambe said that the legislators also resolved to revise and evaluate youth policies. The five motions were on youth unemployment, teenage pregnancy and HIV/AIDS,  alcoholism and drug abuse. There were also motions on social media and youth in leadership.
He further lamented that there should be a change and the youth should not be solely dependent on their governments but rather use the resources provided as stepping stones to empower themselves.
Shepard Simukonda (Zambia) moved an amendment to include sex education on the school syllabus.
The Rules of Procedure were also amended to include the age of the contestants, and make a provision where MPs sit in the chamber of the host CPA member state.

The Government Chief Whip, Hon. Abubakar Khalif (Nigeria), prayed that Rule 30 takes into consideration persons with disability in the course of the House proceedings.
Rule 30 (b) states that, “A member who wishes to contribute to any issue shall stand from his/her seat and shall only speak after being recognized by the Speaker.”

Khalif further said that the youth legislators had agreed to send the Speaker and the Deputy Speaker as their representatives to the CPA Africa Region Meeting and shall present the resolutions and selected topics for the next youth Parliament.