“The moment you stop the old vehicles from being imported, you must reduce tax on the new ones,” Mafabi elaborated. 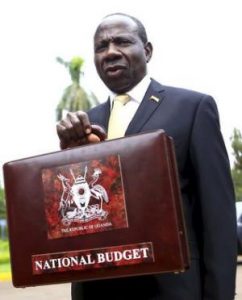 Uganda Minister of Finance Matia Kasaija displays a briefcase carrying national budget before presenting it to the nation during a budget speech.

Members of Parliament on the finance committee have opposed government’s proposal to tax Saccos and individuals engaged in agriculture.
The proposals that also include a ban on importation of vehicles older than eight years are contained in tax bills for the financial year 2018/2019.
The eight tax bills, which are being considered by the Parliament Committee on Finance, include the Excise Duty (Amendment) Bill 2018, Lotteries and Gaming (Amendment) Bill 2018, the Income Tax (Amendment) Bill 2018 and The Stamp Duty (Amendment) Bill 2018.
The Minister of State for Finance (Planning), David Bahati, who presented the bills to the Committee on 24 April, 2018 defended the proposals and denied that they were intended to burden Ugandans.
Hon. Moses Walyomu (NRM, Kagoma County) noted that reinstating the tax on Saccos despite a government commitment to the contrary, will discourage Ugandans from saving.
“We exempted Saccos from taxes to encourage Ugandans to save, let us not re-introduce this tax,” Walyomu said.
Joseph Ssewungu (DP, Kalungu County West) also opposed the taxing of Saccos saying that the majority of Ugandans use savings groups to improve their income.
“Why should Saccos be taxed yet we know that many Ugandans borrow from them because of the low interest rates?” said Ssewungu.
Hon. John Bagoole (Independent, Luuka North) urged government to revise the proposal of levying one percent tax on individuals engaged in agriculture.
“This tax should be levied only on commercial agriculture and not individuals who are practicing subsistence farming,” said Bagole.
Isaac Mulindwa Ssozi (NRM, Lugazi Municipality) called for the complete removal of the proposed tax on agriculture.
“Agriculture is the backbone of Uganda and therefore, any tax in agriculture is not called for,” said Ssozi.
Nathan Nandala Mafabi (FDC, Budadiri West) advised government to institute measures that will motivate Ugandans to buy new cars before banning the importation of old ones.
“The moment you stop the old vehicles from being imported, you must reduce tax on the new ones,” Mafabi elaborated.
Akello Judith Franca (FDC, Agago district) questioned whether government carried out a cost proposal analysis before proposing tax amendments.
“How is Uganda going to benefit from the ban on importation of vehicles after foregoing Shs182 billion,” said Akello.
Francis Mukula (Independent, Agule) said that the ban on old vehicles will make it impossible for majority of Ugandans who are low income earners to buy vehicles.
“I presume the cheapest new vehicle will be Shs 60 million. What plan does the government have for Ugandans who cannot afford new vehicles,” asked Mukula.

Bahati explained that the proposed new taxes are aimed at augmenting the tax effort and are expected to raise Shs951.5 billion, while Shs272 billion is expected to be raised from administrative efficiency to achieve the policy target of 0.5 per cent in line with National Development Plan II.