No Ebola in Uganda 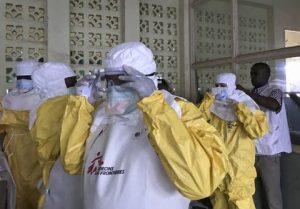 The government of Uganda through State Minister for Health and General Duties, Sarah Opendi, has denied reports of Ebola outbreak  in the country.

Earlier reports had indicated that there has been an outbreak in Mubende district, located in central Uganda.

“We would like to inform the public that there is no Ebola outbreak in Mubende District or any other part of the country,” Uganda’s Daily Monitor reported State Minister for Health-General Duties, Sarah Opendi as saying.

Opendi said that the earlier report of Ebola in the media was actually a case of Crimean-Congo Haemorrhagic Fever (CCHF).

“On the night of May 21, a 35-year-old male from Nkoko sub-county in Bugangaizi county, Kakumiro district presented at Melt Care Clinic with a high fever and vomiting and was admitted for two days,” said Opendi

“As his condition deteriorated he was transferred to Mubende Regional Referral Hospital several days later, put in the hospital’s isolation ward and given intravenous fluids. However, he died the same night,” the minister added saying that tissue samples from the deceased were sent to the Uganda Virus Research Institute (UVRI).

“The attendants of the deceased who included his expectant wife and four others were immediately quarantined and they are closely being monitored. To mitigate any possible exposure from contact with the suspect, all material used by the deceased, including a trolley and beddings were burnt,” she added.

Further measures have been taken by the authorities to prevent the spread of CCHF.

ALSO READ:Uganda yet to win battle against tobacco use