Settling in Leeds and volunteering for a local eco cafe, Namuzungu had her life turned upside down when she was deported to Yarls Wood on May 18 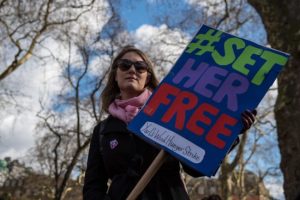 a lady holds up a poster to protest against Glorias deportation

Gloria Namuzungu went to the UK as an asylum seeker to flee persecution from Uganda her home nation because of her sexuality.

Friends and campaigners went to the streets of Leeds in the morning hours of May 29, 2018 to protest and save the 22-year-old Ugandan lesbian who was to be deported in a matter of hours to the country where it is illegal for her to be gay.

Settling in Leeds and volunteering for a local eco cafe, Namuzungu had her life turned upside down when she was deported to Yarls Wood on May 18.

Now campaigners are protesting the Qatar Airways desk in Harrods, London, to ensure that the vulnerable woman will not be sent back to the country.

“Gloria is an active member of the Leeds community. She is a much loved and hard-working volunteer at the Rainbow Junktion Pay as you feel community café who have expressed their distress and concern for her safety,” anti-immigration group Leeds No Borders, who are protesting at the event at 12.30pm.

“Gloria is a much loved part of our team at the cafe, her smile lights up the kitchen and we want her back,” her former Cafe Manager at Rainbow Junk-tion added.

On May 22, she was told she would be returning to Uganda, where she could face violence, imprisonment and ostracisation. 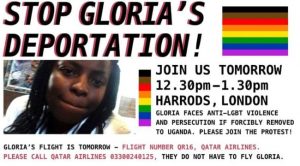 Some of the campaign posters flagged with details of Glorias deportation

Leeds No Borders claim that the 22-year-old was given less than 72 hours to fight her deportation notice, which is against Home Office protocol.

Previously using the name G to protect her identity, Namuzungu disclosed her full name so she could more readily fight the case.

“This isn’t an isolated case and there are also two other women on the same flight being deported to the Philippines who don’t have as much community support and are equally terrified,” Namuzungu’s friend Emily Jennings said.

“We will do everything possible to keep resisting this government’s institutionally racist hostile environment agenda and demand that Qatar Airlines refuses to fly all three women. No-one is illegal,” she added.

Detained for a matter of four days in Yarls Wood before she received her deportation notice, Namuzungu’s friends, colleagues and campaigners are arguing that the young woman hasn’t been given enough time to fight her case.

“The government speaks proudly of its record on LGBT (Lesbian, Gay, Bi-sexual and Transgender) equality yet still routinely send LGBT people back to countries where they face abuse and persecution,” said a spokesperson for Movement for Justice.

“G is not alone, there are LGBT people fighting for their lives in detention centres right across the UK. We know of another lesbian facing deportation on a charter flight to Nigeria tomorrow,”

“LGBT asylum seekers come up against a racist system that treats everyone as if they are liars. If the governments stated commitment to LGBT rights is to be more than empty words G must stay,” they added.

If she returns to Uganda, Namuzungu could face imprisonment, violence and ostracisation from society because of her sexuality.

The climate is hostile for LGBT Ugandans.

In April, Ugandan MPs vied to reintroduce anti-homosexuality law that could imprison gay people for life.

Declaring that homosexuality is “un-African”, MPs tabled the motion, telling an Inter Parliamentary Union (IPU) Summit in March that Uganda would withdraw from the union if it endorsed LGBT rights in any way.

Corrective rape is still used to “convert” gay, bi and lesbian Ugandans in the country.

A spotlight has been shone on the government’s hostile immigration policy since the unravelling of the Windrush Scandal. 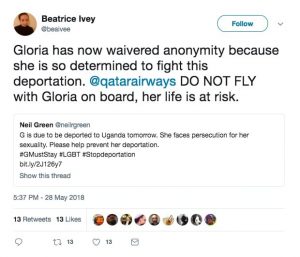 one of the tweets about the campaign to halt Glorias Deportation

A top immigration lawyer remarked that the Home Office rely on “gay stereotypes” in order to classify an asylum-seeking hopeful’s sexuality.

“There is also an over-emphasis, in refusal letters, of the applicants’ alleged failure to deal with feelings about sexuality or feelings of attraction towards the same sex,” wrote the lawyer.

“We should not allow our clients to be subjected to intrusive and humiliating questions about their sexual lives.”