Marco Silva vowed to bring entertainment back to Goodison Park after he was finally confirmed as Everton’s new manager on Thursday.

The Portuguese has signed a three-year deal to succeed Sam Allardyce, believed to be worth £5million a season.

He was the first choice of Farhad Moshiri, Everton’s major shareholder, when Ronald Koeman was fired after a dismal start last October, but Watford would not release Silva. 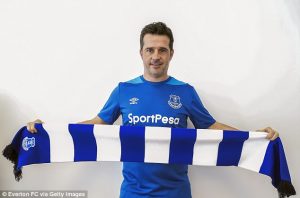 Everton are still in negotiations with Watford over compensation — Silva has not worked since he was sacked in January — but those discussions have not prevented the 40-year-old taking up a position on Merseyside that he insists reflects his ambition.

Allardyce’s short reign was laced with unhappiness and supporters were turned off by the bland style of football he favoured. Silva’s words, then, will have come as an antidote and give them reason to be cautiously optimistic about the future.

‘I know what our fans expect — they expect results but not only results,’ said Silva. ‘I want our fans to be proud when they see our team on the pitch. I want them to feel we are committed, that we are working hard and enjoying our football because that is important as well.

‘We want to build a great connection between the squad and the fans. I’m sure that with our attitude and demands of commitment, then our style of play will see that. Everton is a really ambitious club and that is what I want. 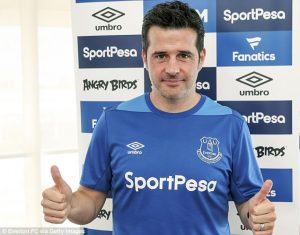 ‘The club is changing its approach. But one thing we cannot change and nobody wants to change is the huge history and ambition of the club. Everybody knows Everton’s history. When you are a club like Everton, you only have one solution — to aim to win.’

The moves Everton have made since sacking Allardyce 16 days ago suggest Moshiri, who now has all the power at the club, has learned from the expensive mistakes of the past two years. 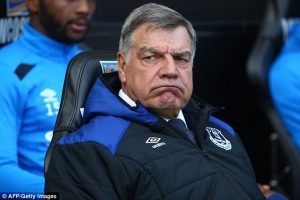 Marcel Brands, who officially starts his role as director of football on Friday, will have a huge input in running the club, while Silva will effectively be the head coach.

Brands, who has also signed a three-year contract worth £2million, is adamant the new structure will work.

Brands said of Silva, who first arrived in the Premier League at Hull in January 2017: ‘Marco is a young coach but also an experienced coach and he’s worked already at the top, while also gaining experience of the Premier League, which is also an important factor.

‘One of the most important things is that he’s a guy who wants to play attractive, attacking football and wants to work in the structure we have. 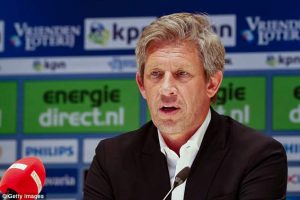 ‘He’s proved already he wants to work with young players and make them better. He will be a very good manager for Everton.’

There was another parting shot at the Allardyce reign, with Brands saying: ‘(Silva’s) vision in football, the way he is thinking about football, is what we want. He wants to structure a team and he has proved that already with a few clubs with good results. I believe strongly in him.’