Annually, Ugandans spend Sh43 billion ($430 million) on air travel, President Museveni said, describing it as a "haemorrhage that must stop." 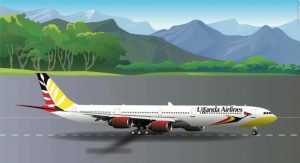 Artistic impressions of what the new Uganda Airlines planes will look like. The images surfaced on social media on the heels of Civil Aviation Authority pages.

Kenya Airways, known by the short code KQ, and its low cost subsidiary JamboJet, have been enjoying a big presence in Uganda capitalizing on the lack of a national airline.

President Museveni on Wednesday 6th June 2018 told Parliament the government would revive the airline “to rejuvinate the services sector.”

“The Government will revive the Uganda Airlines. We have already booked slots for the manufacture of medium and long-distance planes,” he said.

This will cut the 15-year dominance that KQ has been enjoying at Entebbe, which might result in revenue loss as Uganda seeks to claw back regional routes and kick-start a global reach.

KQ has dominated the East African routes over the years.

It has, however, been facing increased competition on African routes from national carriers in neighbouring countries.

JamboJet, a low cost subsidiary of KQ, in February launched twice daily flights to Entebbe, eyeing the traffic between Kenya and Uganda. This is in addition to the five return flights operated by KQ between the two capitals.

The battle for the skies has been with Ethiopian Airlines, South African Airlines and RwandAir, the latter offering low-cost flights in the region.

Annually, Ugandans spend Sh43 billion ($430 million) on air travel, President Museveni said, describing it as a “haemorrhage that must stop.”

Uganda is building a second international airport in its west primarily to service its emerging crude oil industry that is expected to boost a range of sectors including air travel.

Its sole international airport Entebbe is also being expanded with a loan from China to handle more passengers and cargo. Kenya’s exports to Uganda are estimated to be worth Ksh61.8 billion with imports valued at Ksh42 billion.