Luke Shaw admitted a new Manchester United contract seemed an impossibility last season — as he became one of the wealthiest defenders in world football.

Luke Shaw has signed a new five-year contract with Manchester United with a staggering amount of £150,000 a week.

It completes a dramatic turnaround for the 23-year-old, whose career at United had appeared doomed after a steady stream of public and private criticism by Jose Mourinho. 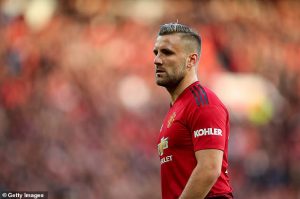 Shaw struggled under Jose Mourinho at first, but is now a mainstay in the manager’s team

Shaw, 23, has enjoyed a superb start to the season and United’s belief in his talent partly convinced them to abandon a move for Juventus full-back Alex Sandro in the summer.

Mourinho informed Shaw while he was on holiday in early June that he would stay at the club as he approached the last year of his contract and the Manchester Evening News revealed that month United were prepared to offer the England international a new deal.

Shaw has been harshly criticized by Mourinho in press conferences a number of times, with the United manager last year claiming Shaw’s performance against Everton that ‘he had a good performance which was his body with my brain’.

Following the announcement of his new deal, Shaw said: “Since I came to United it’s been a whirlwind four years that have passed so quickly. I am very proud to sign my new contract and continue my stay at this great club”. 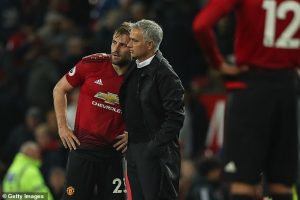 The contract, worth upwards of £150,000 a week, completes a dramatic turnaround at United

‘If you look at my situation in the last year, you would have thought this would have been impossible. But I worked hard and I wanted to make sure my future was here and to help this club, so I am really happy”. He claimed.

“It’s been an odd five years for me. There have been ups and downs but now it is all about looking forward”. He continued.

Meanwhile, the under-fire Portuguese boss was full of praise for one of his stand-out players this season.

“Luke fully deserves this contract. He understood his development process, he has worked really hard at every level and he always believes in himself which is a great attribute to have. Luke is still young and improving and he must feel very proud of himself”. He said.