The first lady of Uganda, also the Minister of Education and Sports Hon. Janet Kataha Museveni has officially congratulated the Uganda Cranes upon the recent back to back victories over Lesotho national football team in group L of 2019 Africa Cup of Nations (AFCON) qualifier. 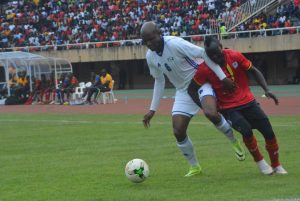 Emmanuel Okwi netted twice in the first leg of the game

Uganda Cranes overcame the Southern Africa country 3-0 and 2-0 at Mandela National Stadium, Namboole and at Setsoto stadium in Maseru respectively to collect 10 points after 4 games in the campaign, leaving Uganda in need of just a point to qualify to the 2019 finals that will be held in Cameroon.

Emmanuel Okwi netted twice and Faruku Miya (penalty) were on target in the Namboole game as Miya carried the day with a brace in the return leg played on artificial surface in Maseru.

The Uganda Cranes contingent to Maseru traveled by a chartered flight offered by President Yoweri Kaguta Mueveni which helped a lot the national team to travel with ease within three days of the return leg after the Namboole success. 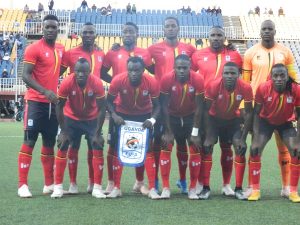 I must begin by thanking God for his goodness and for empowering our boys and leading them as we now see. Then, of course, I congratulate them for emerging victorious during the 2019 Africa Cup of Nations (AFCON) qualifier return match against Lesotho 2-0 on Tuesday, 16th October 2018 in Lesotho, after the previous win of 3-0 at Mandela National Stadium on Saturday 13th October 2018. Our national team’s performance has been very impressive putting us on the verge of qualifying for the 2019 AFCON Championships due in Cameroon.

On behalf of Government, my Ministry and all the people of Uganda, I salute the Uganda Cranes, Coach Sebastien Desabre and his Technical Team, FUFA, National Council of Sports, and the fans for the observable progress we have registered in performance and development of Ugandan football, and indeed Ugandan sports in general.

As we celebrate our recent performance, I call upon the players, technical officials, fans and supporters to remain humble, focused to the very end. For I believe that this is merely the beginning, the best is yet to come.

In a very special way, I thank the President of Uganda, Cabinet in its entirety and Parliament for supporting sports in general, but the president especially for providing quick means of transport to Lesotho and some support for our pocket expenses to the team. We, at the Ministry, remain committed to provide all the prayer back up, logistical and financial support to Ugandan sports teams within available resources.

May I wish the Uganda Cranes team, continued blessings and a successful AFCON 2019 qualification campaign, therefore, as we look forward to an even brighter future for Ugandan sports.

God Bless us all!