Stanley Ntagali, the Archbishop of the Church of Uganda asked President Museveni to inform his security officials to always treat them with respect because they don’t carry guns but rather bibles

Stanley Ntagali, the Archbishop of the Church of Uganda has revealed his disappointments to the security officials when he was first blocked together with wife while on his away Kyando in Mayuge District.

The Arch Bishop was on his way to Kyando to mark the 133rd anniversary death of Bishop James Hannington on Monday.

He therefore asked President Museveni to inform his security officials to always treat them with respect because they don’t carry guns but rather bibles.
“I was embarrassed this morning when I was being blocked from accessing this place,” Archbishop Ntagali said.
“Please advise your security people to handle us with respect. My wife was forced out of the car and had to walk, bishops and their wives carry Bibles, not guns,” the Arch Bishop added.

“I have attended several functions with you at State House and elsewhere but never been treated like this,” he continued. 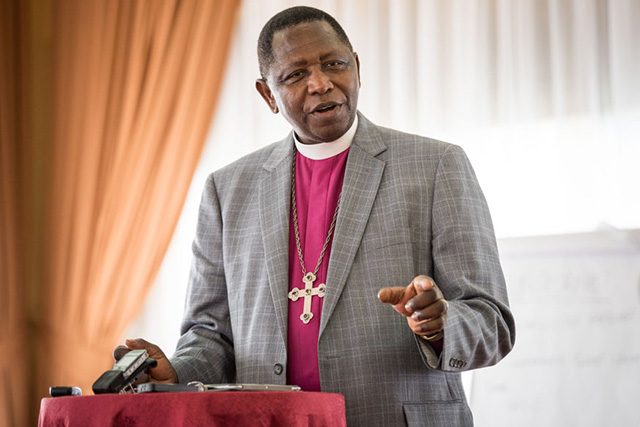 Arch Bishop Ntagali asked President Museveni to inform his security officials to always treat them with respect because they don’t carry guns but rather bibles.

President Museveni also took part in the prayers having arrived at 2:40pm. He was received by Archbishop Ntagali, Speaker of Parliament Rebecca Kadaga, Leader of Opposition in Parliament Betty Aol Ochan and ministers among others.

However, the President Museveni went on to address Ntagali’s issues saying it was a mistake for the officials to act  in that manner and he promised to address the issue.

“It’s a mistake and there is need to teach them. But I think they are overwhelmed by the numbers especially to avert a terrorist strike. But I am going to work on that,” the President said.

The president went on to declare 29th October, the day Bishop Hannington was killed a public holiday citing that its only Luwum and Hannington that were killed for religion.

“Of course we are having many public holidays but I think this one is unique. Like I have stated, only two bishops (Luwum and Hannington) have been martyred for religion in the last 130 years,” he said.

“We can say the public holidays are many but one more will not kill us,” he added.