A seasonal business is one that has a specific time when it makes sales and after that season there is either no sale of less than usual sales.

Such businesses tend to be profitable when it is the season when they make good sales but when the season runs out then an individual may feel like getting out of the business. 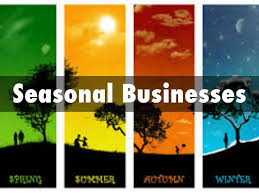 In some instances some businesses do not see the light of the day when the season is off because there are no funds to keep it running.

Seasonal businesses may be as a result of either lack of customers or lack of the raw materials that are used to make what you sell but there is a solution for each and every hindrance.

How to generate revenue when off season

Esther Nakyanzi, a dealer in crafted Christmas decorations says with seasonal businesses if you are not creative then you can go out of business.

“With the nature of my business, someone may think that after that season I become idle but usually I make sure the decorations I make are converted into others that suit any function so that I do not stay idle,” says Nakyanzi.

some of the items that are sold seasonally

She says people should utilise any chance they have to maximise profits so that when the good seasons are over they can use the money to keep the business in place and also venture in innovative projects so as to keep generating income.

On the other hand, Newton Butereba, CEO House of Wealth says when running a business, in order to keep it running, an individual needs to run a complimentary business which is selling things which compliment your product so that people can still come back to purchase items from you until the season is back.

Much as people hate selling on credit, he says that is the ideal thing to do because in the process you will be baiting the customer and also doing a service for yourself because even after the season, you will be able to access money that will help you run the business even in the bad times.

“Usually, with this method, a business man gives the customer items on credit and tell them when they expect them to pay so when that time comes, all the individual will be doing is collect the money,” explains Butereba.

He also advises that people take time to study and understand the continent so that they have other options when the product is off season in their country because each country has a different season.

He gives an example of some countries that will be in winter while others are in summer so they can sell their outfits in countries that need them at that period of time.

He further says extending the market not only gets you other customers but also keeps you busy and relevant in the market throughout the season in this you can easily indulge in cross boarder business.

How to stablise it

Sadat Walusimbi, a businessman says every business needs stability and for seasonal businesses, stability determines whether you will make more sales when the season comes or not make any.

“Stability depends on how you have been operating in the off season that is why it is advisable to keep it busy so that there are no loop holes left for you to fill when time comes for you to start selling again,” says Walusimbi.

He says leaving the business dormant because it is off season may leave the products damaged so putting them out there is the ideal thing to do because there will be less damages to fill when the season comes.

Why people with seasonal businesses are still lagging behind

He says some people have locked themselves up in the one idea which has left their businesses wanting simply because they do not research about the opportunities available in the market so that they can add value to what they already have in store.

He says businessmen should do more research so that they do not become irrelevant in the market simply because they do not have additional knowledge they add onto what they sell.

He further says people with such businesses should be innovative so that they can still come up with ways to make sure that their products get sold even when the season is off.

“There are some products that go bad after sometime and having it store simply means living in loses so making it possible that the goods are sold out gives the individual new ideas for continuity,” says Walusimbi.

He also says low income in some fields has limited the expansion of some businesses because the money they earn from the products they sell cannot let them expand it to other continents.