Ugandans have been advised to stock food as a precautionary measure to counter the effects of desert locusts that are a mere 166 kilometers from the Uganda-Kenya border in the north eastern region of Karamoja according to Uganda’s  Ministry of Information and National Guidance.

Turkana is about 166km from Karamoja, meaning the locusts can reach Uganda in less than two days.
Locusts can cover as much as 150km a day and a swarm can destroy crops sufficient to feed 2,500 people for a year, according to the United Nations.
Experts estimate that the insects are capable of destroying at least 200 tonnes of vegetation per day.
Since the invasion in Kenya late last month, districts in Karamoja and eastern Uganda have been put on higher alert and the public asked to report to the nearest extension staff any ‘strange grasshoppers’ detected. 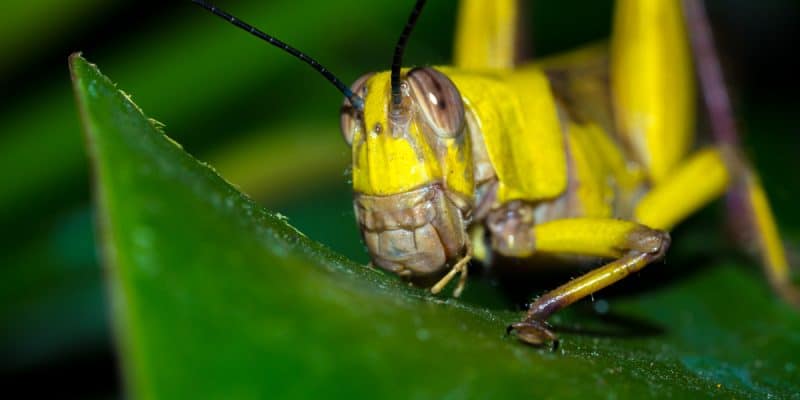 A desert locust on a tree

However, Prime Minister Ruhakana Rugunda has assured the country that government has made preparations to ensure the imminent locust invasion is prevented.

He urged the public to stock food reserves as a precautionary measure.

“With an imminent threat of locusts invading our country from our neighbors in Kenya, I would like to assure the public that the Government is taking this matter seriously and consequently, different agencies of Government have been instructed to work together and collectively heighten our preparedness to prevent and handle the invasion,” the Prime Minister said in a statement on January 21.

He said the Ugandan government is in contact with authorities in Kenya to explore ways of jointly addressing the challenge. 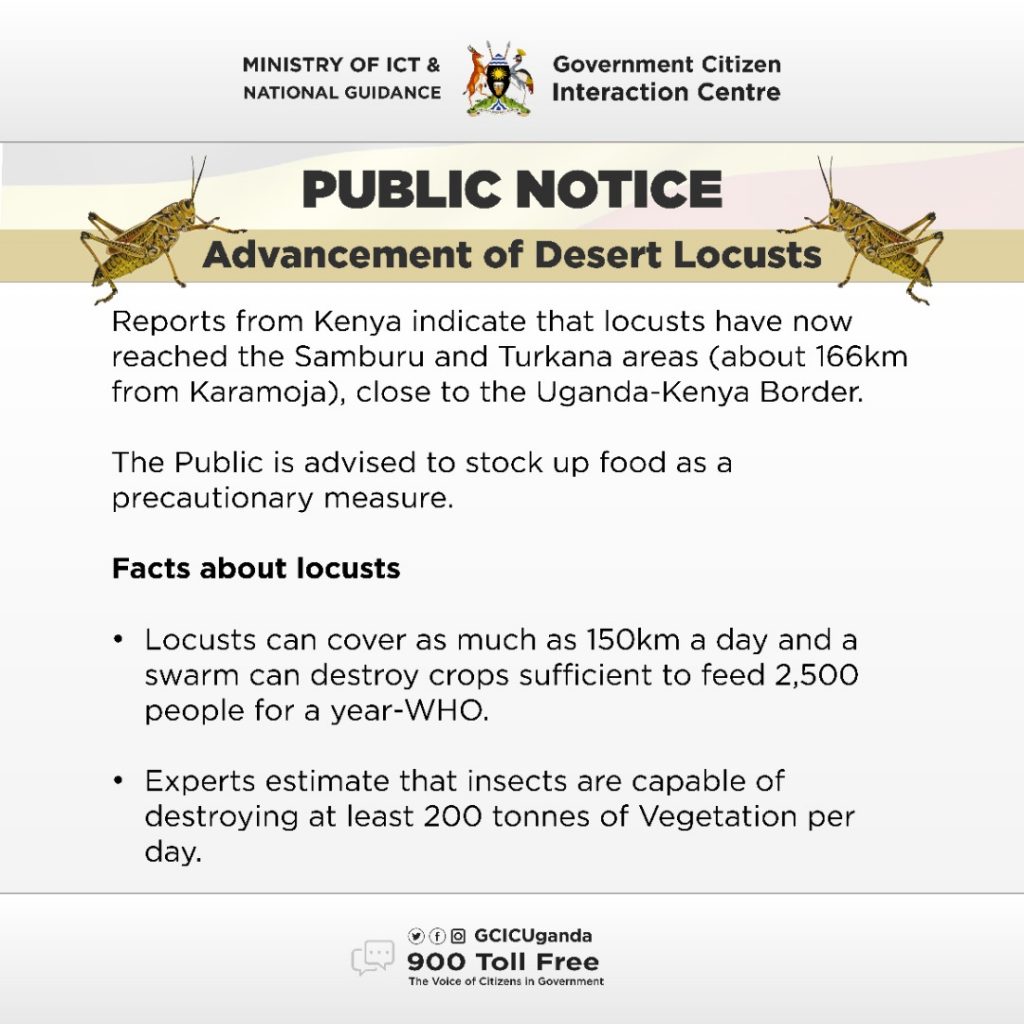 What experts in the region say

According to The Inter-Governmental Authority on Development (IGAD), the severe Desert Locust outbreak in the region is threatening rural food security across East Africa.

IGAD Executive Secretary Dr. Workneh Gebeyehu while calling on member states, the East African Community and partners to pull resources together to prevent, control and possibly eradicate the Desert Locust, said the desert locusts is a threat to livelihood in the Horn of Africa.

“IGAD calls on Member States, the East African Community and partners to pull resources together to prevent, control and possible eradicate the Desert Locust threat to the food security of the region,”said Dr.Workneh Gebeyehu,IGAD’s Executive Secretary and added, “Prevention and control measures must be scaled up to contain further spread of the Desert Locust”. 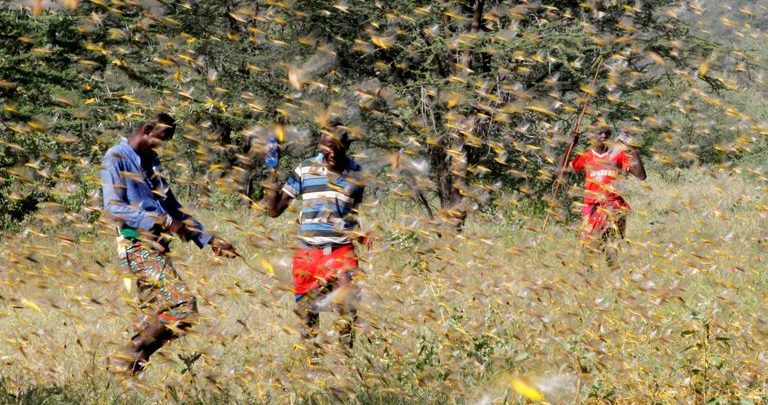 Locals take to chasing locusts from the fields

In a statement, Dr. Gebeyehu said the invasion is a threat to food security of the region. He called for scaling up of prevention and control measures to contain further spread of the Desert Locust.He urged member states to act urgently to avoid a food security crisis in the region.

The Executive Secretary urged for increased ground surveillance for early detection. He called for use of wind forecasts, to help pre-empt trajectory of desert locust bands and swarms as well as immediate regional mapping of current invasion and forecast trajectory.

Dr. Gebeyehu urged countries to act urgently to avoid food security crisis in the region through aggressive targeted aerial and ground spraying and immediate up scaling of aerial control operations.

IGAD is appealing to governments to make use of the mass media especially Radio to disseminate and educate the public in order to aid early detection and reporting.

“Encourage citizens to report any incidences of desert locusts,” said Dr. Gebeyehu in the statement.

Dr. David Phiri, FAO Sub regional Coordinator for the Eastern Africa and Representative of the African Union and the United Nations Economic Commission for Africa warned that the locust invasion is worsening the food security situation in the region.

Dr. Phiri further warned that the weather seems favorable for the locust breeding in high probability that the locust will continue to breed until March-April 2020.

The United Nation’s Food and Agriculture Organisation (FAO) has warned that the large immature swarms are spreading from the initial invasion areas of Mandera County, south of Wajir and Garissa, west along the Ethiopian border in Marsabit county and southwest into central areas of Isiolo, Samburu, Meru and Laikipia counties.

The UN body says one immature swarm is 60 kilometers wide. FAO further warns that the swarms are expected to move into the Rift valley’s Baringo County and move northwest into Turkana County.

Other swarms are expected to move to Tana River County, while others will move to the northeast Uganda and southeast South Sudan. When the swarms mature, they will begin to lay eggs in the sandy moist soils giving rise to numerous hopper bands in February.