UPDF female pilot, Major Naomi Karungi is among the two UPDF officers who perished in a helicopter crash in Gomba district. 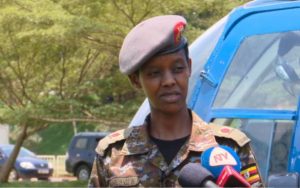 31 year old, Naomi Karungi was on a Training Mission when the helicopter Jet ranger AF302 crashed.

According to UPDF spokesperson Brig. Richard Karemire, the jet AF 301 was on a training mission when it crashed on a hill.

Karungi joined the army after completing her degree in Social Work in Economics at Makerere University. Following the completion of her cadet training, she joined flight school at Soroti Flying School. She later rised to the rank of Major in the army and was a trusted pilot who flies helicopters.