Former Kenya’s President Daniel Toroitich arap Moi died at the age of 95 at Nairobi hospital. Moi was the second president of Kenya since independence.

Daniel Toroitich arap Moi , his wife and the children.courtesy photo

Accorded to Kenyan history, Torocitich was the first president to rule Kenya for the longest period of time, (1978-2002).

Born in Kuriengwo village, Sacho division, Baringo County, moi was the fifth born children to Mzee Kimoi arap Chebii and kabon chebii. moi’s name toroitich  translating  to “welcome the cattle home” was given to him by the cattle keepers who worked for his father.

According to his nephew Joseph Moi Chebii, “Moi had a great interest and love for education”. Toroitich start school after the death of his father in 1928. He first attended to Tandui day and boarding primary school which was then under missionaries.

In 1942, Daniel joined kapsabat government school for his secondary level,

After his secondary level, Arap Moi joined a teachers college in kabartonjo in 1945 were he become a student teacher. 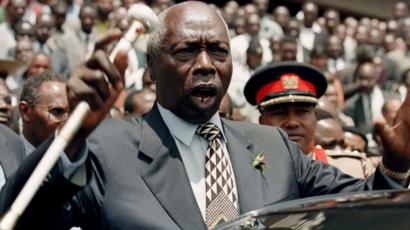 Tambach teachers’ training college was his last work station before he was appointed as a member of the legislative council in 1955.

He served as the third Vice President of Kenya from 1967 to 1978, and succeeded President Jomo Kenyatta following the latter’s death.

He was a close ally of Jomo Kenyatta, who became Kenya’s first president. Moi served as home affairs minister from 1964 and in 1967 became vice-president.

Moi was elected unopposed as president in 1983 and 1988 until he was  forced to adopt a multi-party system of government following mass protests and diplomatic pressure from Western powers.

He was succeeded by President Mwai Kibaki, in 2002.