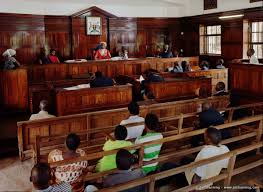 The directorate of public prosecution has implored the legal parliamentary committee to probe the enormous funding inequity in the justice law and order sector. While appearing before this committee chaired by Stephen Tashobya, the deputy DPP Amos Ngolobe said that all other JLOS sector have been fully funded in case of any need but the directorate have been neglected. He said that in this financial year police received billions for manning election but for them they got nothing yet they work together in the process of prosecution.

Currently the directorate is looking for 2.5 billion shillings to recruit and promote staff but instead their budget has been cut by 400m according to the budget frame work paper. Meanwhile the directorate of public prosecution has decried the unending shortage of judges at various levels.

The director of public prosecution Michael Kibitha said that currently case backlog is beyond the capacity to handle. He explained that even key witnesses in these cases have given up because currently the available prosecutors and judges are still working on cases filed in 2012. He called on the legal committee to advocate for more judges at all levels.