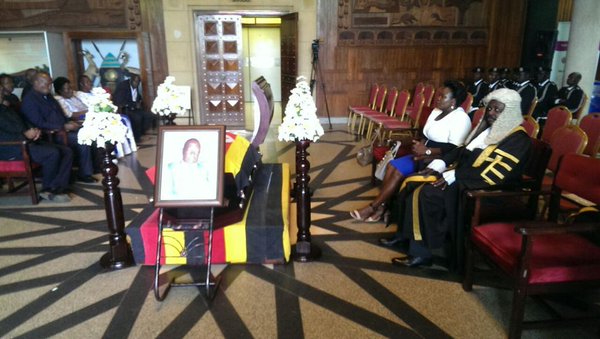 Members of Parliament across the political divide have paid tribute to the former member of parliament for Bunya west late William Wilberforce Kiwagama. MPs in a special sitting described the late as a dedicated servant to Uganda who was committed to the well-being of the people he represented.

Kiwagama who died on Friday, 18th March 2016 at Mulago Hospital represented Bunya County in the National Resistance Council from 1989 to 1996, was a Member of the Constituent Assembly for Bunya County West from 1994 to 1995 and a Member of Parliament for the same constituency in the Seventh Parliament (1996 to 2001). Moving a Motion at a special sitting to honour the deceased, the Prime Minister and Leader of Government Business, Dr Ruhakana Rugunda said that Kiwagama served with commitment and that the country had lost a mentor to the young people in Uganda. He recognized late Kiwagama for donating huge pieces of land for construction of community projects in Busoga.

The Opposition Chief Whip and Dokolo Woman Representative, Cecilia Ogwal while seconding the Motion said that the Late was a dedicated servant of Busoga who served with dignity, humility and honesty. She called on government to take the opportunity and improve the condition of the Heart and Cancer institutes at Mulago Hospital.

Aruu county member of parliament Odonga praised the late Kiwagama for his commitment to his political party unlike in the present day when many politicians keep switching positions, adding that many of politicians when are thrown out of the party they move to others or stand as independents. The minister for lands and urban Development Daudi Migereko asked Ugandans to interest their children in training for quantity surveying and Civil Engineering since the country has few of such professionals yet the population is growing and it will require many Engineers for building.

The Government Chief Whip said that the former representative for Bunya West encouraged other legislators to participate in agriculture and other income generating ventures like tree growing. The Deputy Speaker, Jacob Oulanyah who chaired the special sitting said that the late former MP was so rich and gifted and yet so humble. The Motion sought that Parliament conveys deep condolences to the bereaved family, relatives and the people of Bunya West and Uganda as a whole. It also sought to take cognisance of the services he rendered to Uganda.

The Late William Kiwagama will be laid to rest at his home in Bufulubi Village, Imanyiro Sub-County, Mayuge District, today, Wednesday 23rd March 2016.  He was one of the first Ugandans to qualify as a quantity surveyor and rose to prominence in the East African region before venturing into politics.