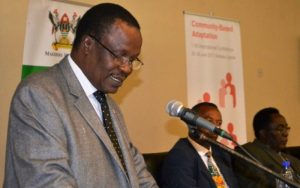 In a bid to fight off the persistent drought scale up in Mubende district, government through the Ministry of Water, and Environment has launched a joint campaign in partnership with the European Union to construct enough valley dams to enable  pastoralists areas have enough water for their animals and crops.

As a result, five valley dams have already been constructed so far in the Sub Counties of Kigando, Kitenga and Kiganda respectively with the aid of over 11million Euros courtesy of European Union to fight off the persistent drought affecting farming within the district.

While launching the multi-million valley dam project at Kinoni Village, Kiganda Sub County, in  Mubende district recently, Minister for Water and Environment, Hon. Sam Cheptoris, expressed concern over the overwhelming number of Ugandans dying of hunger because of the persistent drought in the country and thus urged residents of Mubende to use the available drainage features in the country to fight drought. 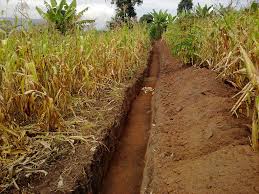 Some of the climate change measures farmers are adapting to- digging trenches to distribute water.

The minister has also called upon all residents in Mubende to abscord from environmental degrading activities mention the rampant cutting down of trees for charcoal rather adopt afforestation policy so as to improve on the climate change in the area.