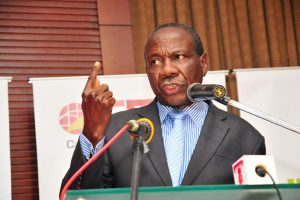 Matia Kasaija, the minister of finance

The Ministry of Finance has authorized the Uganda National Drugs Authority (NDA) to hike verification fees for imported drugs as a means of boosting locally produced drugs.

The NDA has been charging 2% verification fees on imported drugs but this will now be raised to 12%.

Speaking during a meeting on improving Uganda’s competitiveness in doing business, Finance Minister, Matia Kasaijja, said many Ugandan companies have built capacity but marketing their products locally has been a challenge due to tough competition from multinational pharmaceutical companies.

He says this directive which takes effect this financial year is anticipated to create local competition as well as promote the Buy Uganda Build Uganda policy.