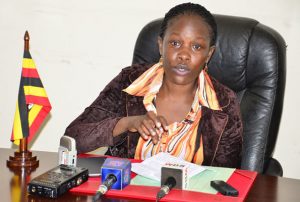 Government has pledged to increase water provision in Mityana following the drying up of most of the water sources in many Sub Counties of Mityana district.

This after the Member of Parliament for Mityana district, Judith Nabakoba, decried water scarcity in the district which has worsened for the last one week while at the floor of Parliament.

Nabakoba said that most wells and boreholes have dried up in most Mityana district sub counties which are water stressed some of which include;   Namungo ,Manyi, Sekanyonyi,Ganda ,Bulera , Kikandwa among others.

She noted that school going children are affected since they spend long hours while lining up at few water sources which have not dried up and have no time to be in classes.

Nabakoba asked government to urgently attend to the water crisis in the area so that more boreholes are drilled.

The Minister of State for Environment, Mary Goretti Kitutu Kimono, however, attributed the water crisis in Mityana to unusual drought which has affected most of the water sources and promised to ensure that Mityana is catered for water provision to reduce the current water scarcity in the area.

She also asked the public against planting eucalyptus trees in wetlands and near waters sources to avoid drying up of water sources.