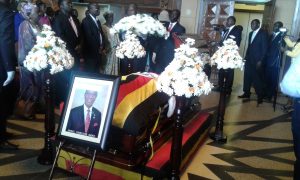 The body of late Sam Owori lays at Parliament

The Prime Minister Ruhakana Rugunda described late Sam Owori as an accomplished gentleman with integrity who worked for championing  the cause of the less privileged.

He also recorganized him for promoting peace, provision of safe water, fighting disease and supporting the cause of saving the lives of mothers and education.

The minister of state for works who is also the UPDF representative in Parliament General Edward Katumba Wamala remembered the late as a person of a strong character which earned him a special class
worldwide.

He asked Ugandans to emulate the late by driving rotary to levels of his dream through recruitment of youth and women.

The minister of state for health in charge of General duties who is also the MP for Tororo district, Sarah Opendi, said that the late Owori will be missed for his contribution for the survival of the rotary activities in Uganda during the former President Idi Amin Dada where by some rotary clubs were closed because government was suspicious of activities of Rotarians.

Sam’s term as Rotary’s 108th president would have begun on 1 July 2018.
On Thursday 27th July there will be Church Service at All Saints Nakasero starting 9am, thereafter body leaves for Tororo.