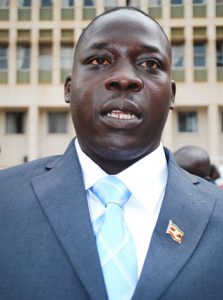 The ministry of health has been asked to start registering all traditional healers/doctors as a way of following their work to control the rates of child sacrifice in the country.

This call was made by the Ayivu county Member of Parliament, Bernad Atiku, who is fronting a private member’s bill known as the Anti-Human Sacrifice and Harmful traditional practices bill 2017. Atiku was granted leave by parliament in August this year to prepare this bill.

Related: MPs Abiriga and Atiku get into scuffle with each other

Atiku noted that with the traditional healers working in an informal sector leaves many at liberty to involve in ritual murders because there no rules that govern their work.

Addressing the press at parliament as he gave update on his bill, Atiku said that its high time government comes out to register and get evidence from those who claim to be traditional doctors and inspect their medicine, certify them and be given licenses as this will limit the quack ones that take people’s lives as they hoodwink the public who go for services.

He said starting this Friday, he will start receiving public views on what they think should be done in order to streamline the traditional healing sector nothing that the districts with high cases include Mukono, Jinja, Busia, Kayunga and Buikwe among others.