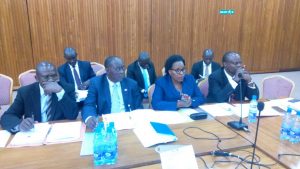 Bank of Uganda appearing before the committee

The Bank of Uganda officials led by the deputy governor bank of Uganda Louis Kasekende were grilled before the parliamentary committee on commissions, statutory Authorities and state enterprises over hiring external lawyers to battle court cases which are against central bank.

Among the notable cases is the ongoing crane bank case against bank of Uganda which is being pursued by the private lawyers on behalf of bank of Uganda.

The committee members who include the woman MP Koboko district Margaret Babadiri, Kitgum municipality MP Beatrice Anywar ,Bukedea district woman MP Anita Among and Abdul Katuntu pinned Bank of Uganda officials for not utilizing the services of the office of the Attorney general as the government principal legal advisor to battle some of the cases brought against bank of Uganda instead of wasting tax payers money on hiring external layers.

Katuntu  said that government should guide the its institutions  on what point they should seek external lawyers service to cut costs spent on private layers yet there is Attorney general paid to deal with court cases.

However the deputy governor Louis Kasekende and bank of Uganda legal officer Margaret Kasule said that the central bank legal department is under staffed hence resorting to hiring the private lawyers.

the commitee gave officials from Bank of Uganda up-to Thursday to submit the total legal fees they have paid to external lawyers since 2013.The fees must also include those paid to lawyers in the case between Bank of Uganda and Crane Bank.

ALSO READ:Health plus to skill young people in Busoga