Block all causes of disability- Museveni

Block all causes of disability- Museveni 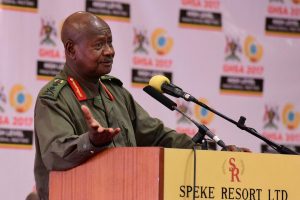 President Yoweri Museveni has called for blocking all the ways and causes of disability adding that the number of People With Disabilities (PWDs) should not grow beyond 4.4 million of the national population.

“We need to block all the possibilities of disability to prevent more disabilities like we did to eradicate polio and measles. Even accidents are preventable,” he said.

The President was today speaking during celebrations to mark International Day for People With Disabilities. The national venue for the celebrations was at Kamwenge Primary School grounds in Kamwenge district, Western Uganda.

According to the National Population Census of 2014, the population of PWDs in Uganda stood at 4.4 million.

The celebrations focused on the theme of “Employment of Persons with Disabilities is key to Sustainable and Resilient Society for All.”

During the celebrations various PWDs, both young and old hailing various district unions and the national umbrella organizations, displayed a variety of commercial and income generating products like handicrafts, fabrics, artwork, assistive devices, among others, to depict that disability is not inability. They also showcased different presentations of entertainment. 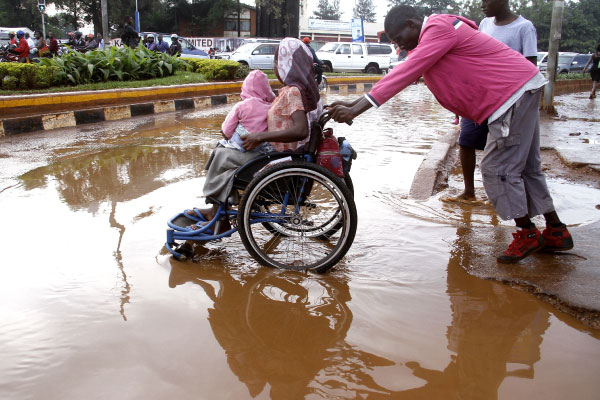 According to the National Population Census of 2014, the population of PWDs in Uganda stood at 4.4 million.Photo Daily Monitor

Addressing himself to the issue of employment opportunities for people with disabilities, President Museveni highly commended the excellent performance of some elements of people with disabilities in society emphasizing that disability has nothing to do with working. Mr. Museveni, however, advised that the better method for PDWs is self-employment. He observed that Operation Wealth Creation programme at household level is another method using the line of special grant from the government.

President called for the establishment of more vocational training institutions with emphasis on equipping PWDs with the relevant skills. He remarked that when the National Resistance Movement Government took power in 1986, it instituted affirmative action, gender balance and women emancipation that has so far resulted in the introduction of slots of representation in Parliament of women, the youth, the disabled, soldiers and workers.

The Minister of State for Gender and Culture, Hon. Peace Mutuuzo, said that the forces and causes of disability are diverse and constitute a hindrance to accessing social economic development. She reported that the 2040 national vision prohibits any further discrimination of PWDs with a view to addressing issues of inequality among the vulnerable persons.

“The Government Special Grant for the PWDs since 2009/2010, has supported them to improve on their livelihood and affirmative action has enabled every PWD to access the Fund,” she reported.

The Minister also observed that advancement in technology sets a challenge to PWDs with regard to ICT. She, therefore, appealed to the Government to develop an ICT policy on disabilities. She called on development partners, UNICEF, UNDP and the media, among others, to supplement and uplift services to PWDs.

The Chairperson of the National Union of Disabled People of Uganda (NUDIPU), Ms. Night Grace, observed that the celebration of the day constitutes recognition of the potential of PWDs to achieve great success in whatever they undertake, promotion of their cause and drawing attention for all not to be discriminated.

“The PWDs should be recognized for their sustainable contribution to development in society,” she stressed.

She appealed to the Government to consider PWDs for all inclusiveness for employment opportunities and also to increase the budget of the responsible Ministry for the benefit of people with disability.