First lady calls for tough actions towards Gender Based Violence 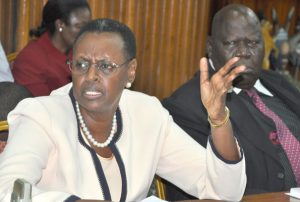 The first lady and minister for education and sports Janet Kataaha Museveni has urged governments in the Great lakes region to strengthen their efforts towards the eradication of all forms of Sexual and Gender Based Violence (SGBV) in the Region.

Speaking during the commissioning of the International Conference on the Great Lakes Region- Regional Training Facility on the Prevention and Suppression of Sexual Violence (ICGLR-RTF) at Munyonyo, Mrs.Museveni noted the need to combat sexual violence against women and children through preventing, criminalizing and punishing acts of sexual violence, both in times of peace and in times of war, in accordance with national laws and international criminal law.