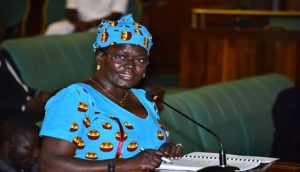 A Majority Report of the Public Accounts Committee (PAC) presented by the Chairperson, Hon. Angelline Osegge on the utilization of US$200 million Preferential Trade Area (PTA) loan has recommended the censure of Finance Minister Matia Kasaija and sacking of Secretary to the Treasury, Keith Muhakanizi.

The report released to parliament by the public Accounts committee chairperson who is also Soroti district woman MP Angelina Ossege indicate that the loan was acquired from the East and southern Africa Trade and Development  bank(PTA) to provide funds for the National medical stores in order to provide  medical supplies to various hospitals.

The committed noted that despite the ministry of finance headed by minister Kasaija receiving the money did not give the money to the National medical stores to procure the required drugs which is now posing a health crisis and life threatening to the people.

The committee stated that notwithstanding the several demands for the ministry officials to avail specifics on how the money was disbursed by the end of the financial 2016/17 this was never availed.

PAC hence faulted the minister of finance Matia kasaija for lying upon parliament in the justification for the loan approval stating that the critical area for funding was medical supplies for the National medical stores hence the ministry received this money fraudulently.

The committee further called for the sacking the secretary to Treasury Keith Muhakanizi over conflict of interest, collusion and connivance in abuse of this fund and be probed by the IGG.

The Deputy Speaker of Parliament, Jacob Oulanyah, said a comprehensive debate on the two reports would be held next week after allowing Kasaija an opportunity to present his case.

On his part, Kasaija said the matter touches on his integrity and that he would present his explanation and await the MPs’ decision on the matter.
“This is a very fundamental and very serious report. It touches on my integrity; I have served this country diligently for 50 years. This is a matter which I want to be given thorough opportunity to explain,” he said.

This imposed additional budgetary constraints on NMS, which sought financial support from government to the tune of shs68 billion to address the currency fluctuation.

The report contends that a similar loan for currency stabilization was rejected by Parliament, only to be reintroduced by Kasaija under the pretext of salvaging NMS.