Report:Government should support education in hard to reach areas 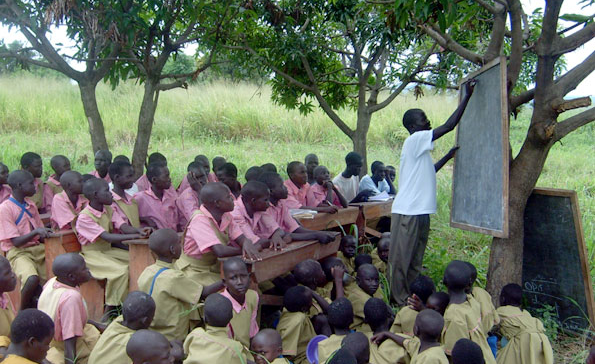 Pupils learning under a tree:learning facilities in most parts of Uganda are in bad state according to the report.

The Equal opportunities commission has released a report that assessed 17 government sectors’ performance calling for interventions for government to enable the poor, orphans, learners in hard to reach areas   to access the best education in their respective locations regardless of their economic status.

The commission report handed over to the deputy speaker of parliament Jacob Oulanyah indicates best education has turned out to be for those in better economic class.

One of  commissioner’s on the Equal opportunity commission Jeol Ojuko  noted that over the years the worst performing sub regions in PLE, UCE, UACE examinations are located in the Eastern region and of 30 districts  poor performing districts six are from busoga which include Bugiri ,mayuge Luuka .kaliro ,iganga and Buyende.

The commission  also the health sector budget for the financial year 2018/19 is reduced by 136.6 billion shillings from 1.8 trillion shillings budgeted for this sector amid the health challenges Ugandans are facing which include drug stock outs, maternal mortality, lack of housing for health workers, inadequate hospitals among others.

The commission reported in the findings that they received complaints of unfair taxation which result into collapse of various businesses with over 50% failing to reach their first birth day.

The deputy speaker of parliament Jacob Oulanyah asked the Equal opportunity commission to get interested in pushing for government to have more focus on working on rural roads which are not under UNRA and are in poor state.