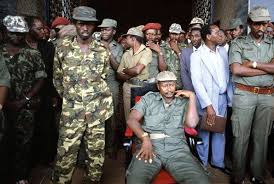 The National Resistance Army (NRA) historicals have been told to pick their benefits from Luwero triangle ministry including President Yoweri Museveni for having participated in the war that led in the NRA government into power.

The minister of state for Luwero triangle Dennis Galabuzi said that his ministry agreed to give one off gratuity of 10 million shillings to all 40 NRA historicals.

He said that those who have not picked their money can go through the ministry and get this money especially General Salim Saleh who complained of having not got his benefits under the war claimant programme.