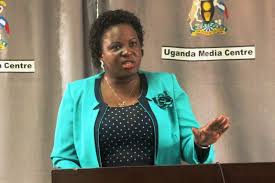 There was an exchange of bitter words between the minister of Lands, housing and Urban Development Hon Betty Among with the former Tooro Kingdom Prime minister Irumba Stephen erupting from the land on which Kyaka II Resettlement Camp in Kyegegwa district is situated.

The minister who had gone to lay strategies of surveying this land after a directive from the Rt Hon Prime Minister Dr Ruhankana Rugunda, for a survey after clarification that this land belongs to government which did not go well with Mr Irumba Stephen, who said his land on block 82 plot 2 had been taken up by the camp.

The former premier informed the minister that he obtained 8000 hectares of land in this area and obtained a title from the ministry of lands, which was gazette in 1964, which the minister said the land act directs that any citizen with a title in wetland the title turns invalid.

The area MP Hon Jackson Kafuuzi informed the minister that there is a growing tension of a tribal crash in the following, following the tribal sentiments alleged to be behind this land.

Kafuuzi said the Tooro Kingdom Officials have continued to accuse him of trying to evict locals in this area which is likely to cause mayhem in his area.