National Drug Authority in the spotlight over negligence 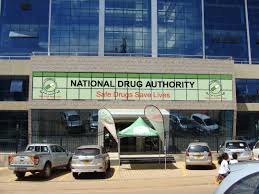 Pharmacy owners have asked parliament to audit the National Drug Authority activities and operations for allowing the existence of illegal and unlicensed drug shops.  as they give the health committee of parliament a report showing rot in this Authority.0

While appearing before the health committee of parliament were they handed in a report showing rot in the authority, the group led by the legal secretary of the pharmacy Owners Association of Uganda, Deo Kalikumutima, accused NDA of allowing the illegal and unlicensed drug shops  existence in less than 1.5 km from existing pharmacies contrary to regulations set out by the National Drug Authority for drug shops.

The group gave out to the committee chaired by Bukuya County MP, Dr. Micheal Bukenya, a list of five drug shops  operating within illegal locations next to pharmacies which include St. Joseph drug shop in Kyebando, St.Jude drug shop in Ssonde, Grace drug shop, Zebra drug shops in Luwero, Kikyusa and J-stone  drug shop in Wobulenzi .

They claimed that some of the drug shops sell drugs of class A which is meant for  pharmacies yet these drug shop owners are not trained and do not possess licenses that allow them to give  such drugs to patients or clients.

They also blamed the National Drug Authority for levying high taxes on drugs in terms of verification fees that has led to high cost of medicines but also created over dependence by NDA on fees paid by Pharmacy owners.

The legal secretary to the Authority, Deo Kalikumutima said that they are concerned about funds collected by NDA and  used on wasteful expenditure in office construction estimated at 27 billion shillings, rent of office space at a cost of 617 million per year yet it abandoned its offices and  planned construction of another laboratory.

He said that parliament should stop  the  National Drug Authority from banning the new pharmacies in Kampala and other urban centers saying that there is still need for more pharmacies in town areas since one pharmacy can apparently serves about 1000 people.

He added that the NDA should make foreign investors set up pharmacies in villages since for they can raise the required capital to do so.

The committee chairperson, Dr.Micheal Bukenya  scheduled a meeting with NDA officials on Wednesday this week  to respond on the issues raised by the Pharmacy owners.