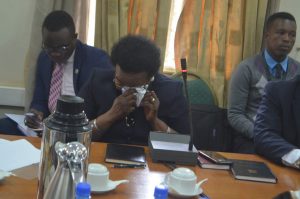 State Minister for Lands, Princess Persis Namuganza uses a handkerchief to dry her eyes from tears while appearing before the Parliamentary committee

Bukono County Member of Parliament and Lands state minister Persis Namuganza on Wednesday broke down before members on the parliamentary committee on Rules, Discipline and Privileges as she explained her feud with the Speaker of parliament Rebecca Kadaga Alitwala, According to the observer,

She asked that the committee guides and reminds the speaker of the decorum of her office so she can stop using her ego dishonourably.

Deputy speaker of parliament Jacob Oulanyah directed the committee to probe into the ugly feud between the two Busoga sub-region region political kingpins.

Kadaga and Namuganza’s conflicts started early this month at function to launch boreholes in Bukono, where Namuganza reportedly told off Kadaga and Busoga king Gabula Nadiope to concentrate on ‘fighting jiggers in Kamuli’, which to her are a serious threat than ‘poking their noses’ into Namutumba affairs.

Kadaga along with the Kyabazinga of Busoga, William Gabula Nadiope IV had earlier gone to Namuganza’s Bukono constituency and installed a chief without her knowledge, which to the latter was an insult.

In response, Namuganza rallied her voters in Bukono to use stones and sticks to chase away the Kyabazinga if he ever goes back to that area in her absence and warned Kadaga to back-off matters of Bukono and Namutumba district generally. 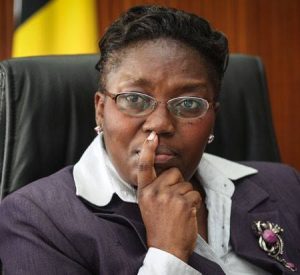 The Speaker of The Parliament of Uganda Hon. Rebecca Alitwala Kadaga

Namuganza further accused Kadaga of buying off her brothers and sisters to gang against her and also poison her.

The Minister also noted that, since those incidences happened, she could not take ‘water’ from her own family as she broke down in tears.

Namuganza told the committee that ever since the passing away of the late Bukono chief Christopher Mutyaba, her father, there has been a succession war that has left her family and the entire Busoga region divided.

And that because of the sensitivity of that Bukono chief issue, the president intervened, and in February this year, he advised that the succession ceremony be halted until all sides agree on the rightful chief.

Namuganza said she was shocked to learn that Kadaga flew to Bukono just a day after the president halted the process and installed a chief, which has since then sparked off violence in the region.

It was on that basis that Namuganza also asked the committee to advise Kadaga, to learn to always heed to the advice from President Museveni as a head of state to avoid unnecessary quarrels.

According to Namuganza, it was so disturbing that the leader of parliament couldn’t show any respect to the people she leads but rather work towards destabilizing Bukono people and the entire Busoga region.

Namuganza further noted that nobody desires to live a life of conflicts and that as a politician; she couldn’t sit and see the speaker start early campaigns for her political rival who she defeated in the 2016 general elections.

Namuganza asked the committee chaired by Kalaki MP clement Ongalo-Obote to compel speaker Kadaga to leave matters of royals to royals and never to pop her nose into affairs which do not concern her.

Regarding the political question, Ms Namuganza told the Committee that the Speaker never supported her in the NRM Primaries for the Parliamentary seat which were held five times amidst violence, only to later emerge winner with a landslide victory as an independent candidate.
In a surprising development, the minister accepted having insulted Ms Kadaga on several social functions but she said that this was provoked by the Speaker’s own actions.

On Tuesday 27th March 2018, lawmakers from the Busoga Parliamentary Caucus appeared before the same committee and recommended for the censure of Ms Namuganza as minister, saying that she was involved in gross indiscipline.
The lawmakers further accused the minister of demeaning leaders from Busoga region mainly the Speaker and the Kyabazinga, William Gabula Nadiope IV whom she allegedly described as incompetent.
Namuganza said that she does not subscribe to the Caucus which she says it is not an organ of Parliament.
She instead asked the committee to probe the “caucus” for allegedly making ‘illegal declarations’ barring her from accessing her constituency.

She asked the committee to summon the Speaker to not only explain her role in the royal affairs of the kingdom and Bukono County, but also advise her on the parliamentary decorum relating to her position.
Namuganza wants the Speaker to apologise to her and the people of Bukono for allegedly opening fresh wounds regarding the controversial installation of the incumbent Kyabazinga.
The Deputy Speaker of Parliament, Jacob Oulanyah tasked the committee about two weeks ago, to investigate the rift, establish the circumstances under which the two were bickering and advise Parliament.
Mr Oulanyah noted that the public exchanges were casting Parliament into negative light and needed to be put to rest