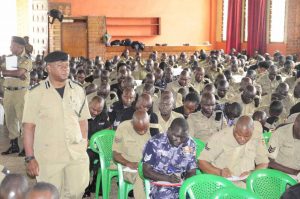 The Uganda police force directorate of Peace Support Operations has conducted the second aptitude test in English on a total number of 587 under the African Union (AU) Pre -Assessment for Assistance Mission service (AMS) at Nsambya Youth Sharing Hall on April 3 2018.

The AIGP Grace Turyagumanawe, the Director Peace Support Operations Uganda police force said the exams were to prepare officers to seat for a much bigger examination where they would compete at continental level.

Grace added that the exams are prepared by African Union and would select those who will qualify to be deployed in any Mission in Africa country in need. The tedious examination process will successfully see candidates join foreign missions for the next two years.

The AIGP also noted that those who qualify for the interview must be attested members of the police force, not on probation, served at least for five years and with no any acts of indiscipline in their files, a valid driving permit and a passport.

He highlighted benefits of Uganda police officers going for peace missions among which include exposing the   personnel to international policing experience and improving their welfare.

He explained that the experience they acquire from the mission helps the force in applying the operational skills in policing and promoting transparency.