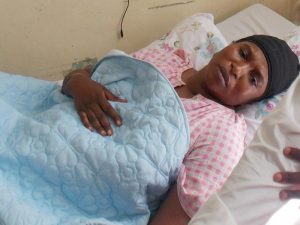 The Bibuuza singer in hospital under going treatment. internet photo

Local musician Madinah Nambooze  commonly known as  Hajati Madina the “Bibuuza”singer who was pronounced dead by social media platforms especially whatsapp and Facebook on Monday was diagnosed with a heart complication in Mulago hospital. She needs over 18m for the operation in India.

Hajati Madina has been down with a strange but serious disease for some years now. She has been receiving treatment in Mulago hospital with the financial assistance from people most especially Sylvia Namutebi aka Maama Fiina.

Andrew Benon Kibuuka the President of Uganda Performing Artists Association (UPPA) clarified that, “As far as I am concerned Hajjat Madina is not dead. She is still alive. I have not yet received any information of the sort from her care takers.”

The bibuza singer was currently discharged from Kiruddu Hospital to reduce the hospital bill as her remaining treatment only has to be done abroad. “She is living somewhere in Rubaga where she is being taken care of by her relatives as we look funds to have her taken to India for further treatment,” Kibuuka added.

Madina is currently seeking financial assistance to undergo surgery in India. Kibuuka says the family needs about Shs18 million to cater for Madina’s treatment abroad. He called on the public to support the cause before it is too late.

Below is a video of her song “Bibuuza.”