President Uhuru Kenyatta reveals his intentions of not running for a third term according to his interview with CNN's reporter Richard Quest.

President Uhuru Kenyatta revealed his intentions of not willing to change the constitution in order to run for another term in office.

This was said in an interview with Richard Quest of CNN on Friday last week, a video that was later released on Monday.

“I’m not interested in a third term,” Mr Kenyatta replied while asked if he has a plan of changing the constitution.

Kenyatta also revealed that his handshake with the now African Union Representative for Infrastructure Development in Africa Raila Odinga was meant to bring about development to Kenya.

“We’ve said, ‘Look, we don’t have to always agree on everything. But we can agree on things Kenya, and we can agree that this issue of cyclical elections has to come to an end,'” the President said.​ 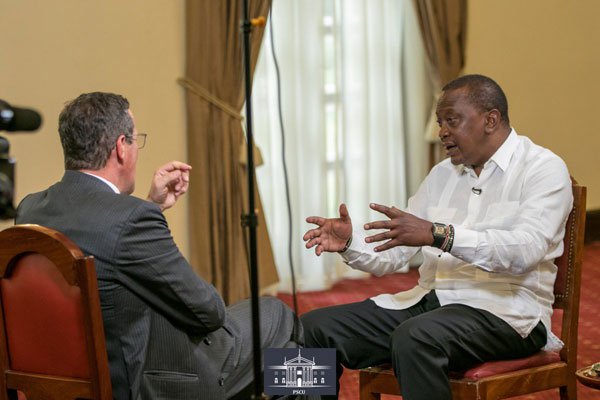 Among other questions, Kenyatta was also questioned of whether he is bothered by the country’s debt to the Chinese.

Kenyatta revealed why people are only focusing on China as the only lender to Kenya and not other multilateral lenders like World Bank and African Development Bank.

“Why are we focusing ourselves only on one lender?” Mr Kenyatta asked.

“As far as I am concerned, we have a very healthy mix of debt from the multilateral lenders — who are basically the World Bank and the African Development Bank — to bilateral lenders like Japan, China, France, all who are participating and working with us to help us achieve our objectives,”  Kenyatta added.

Kenyatta was also quizzed on China’s intentions of giving loans to African Countries.

“We have an infrastructure gap that we need to fill and we are going to work with our partners across the globe who are willing to partner and to work with us.”

“What would worry me is if the debt that we have incurred has gone into recurrent expenditure, has gone into paying salaries or electricity bills and so on and so forth. But what we have utilised our debt for is to close the infrastructure gap,” he said.