Kamukama was summoned by the Commission to explain Presidential directives

The office of the President has disowned claims by Lands Minister Betty Amongi,  that it directed her to draw huge sums of money from the land fund to pay- off claimants. 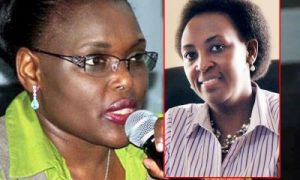 This was been revealed by the Principle Private Secretary to the President Molly Kamukama as she appeared before the Land Probe Commission Chaired by Justice Catherine Bamugemereire this morning.

Kamukama told the Commission that when petitions concerning land matters reach her office , she usually writes back and  directs the relevant ministry to manage , investigate the complaints  and at the end write a report back to her.

She testified that Minister Amongi did not heed to these instructions and  she went a head to direct payments from the  land fund, without reporting back to the office of the President.

Kamukama further told the commission that  she believes Minister Amongi is a competent public servant who can  assess whether the claim is valid or not, after an investigation.

Kamukama was summoned by the Commission to explain Presidential directives allegedly issued by the President’s office regarding payments from the Land Fund.

The Commission Chair Justice Catherine Bamugemereire suggested to Kamukama that the office of the president shouldn’t wait for the Land Probe Commission’s report and recommendations to deal with such people, who have stolen money from the Land Fund and deprived the rightful  beneficiaries of their Compensation.