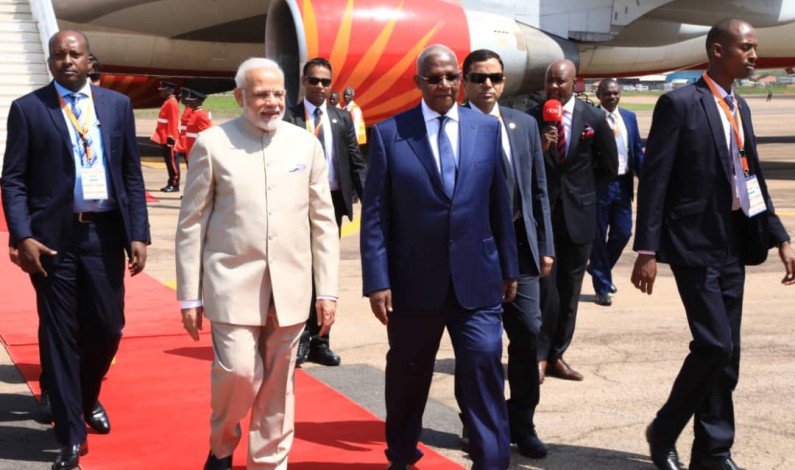 Indian Prime minister, Nandera Modi, has arrived in Uganda  for two days visit before flying to South Africa for the 10th Brazil, Russia,India, China and South Africa (BRICS) summit. Modi’s visit is intended to strengthen the ties between Uganda and India that were damaged during Idd Amin’s regime as well as removing the imbalances in […]

By Ultimate Admin on September 26, 2016 action taken against foreign companies operating in Uganda but are exploitative to Ugandans as those in Arab countries, Chairperson of this Committee who is also the Woman MP for Nakasongola district, China Harbour Engineering Company Ltd among others, companies are mistreating Ugandans, Employment and Industrial Relations, Entebbe Express High way, foreign companies exploiting Ugandans are mostly from China, gender, going to undertake field trips in the foreign companies in Uganda those that employ Ugandans in the Arab-Asian countries to establish the truth of the matters whether the workers are exploited., India, Kabafunzaki Herbert, Labour and Social Development Committee of Parliament, Margaret Komuhangi, State Minister for Labour Latest Uganda News

The Gender, Labour and Social Development Committee of Parliament has said there needs to be action taken against foreign companies operating in Uganda but are exploitative to Ugandans as those in Arab countries. The Chairperson of this Committee who is also the Woman MP for Nakasongola district, Margaret Komuhangi, says that some companies are mistreating Ugandans and […]

Many Ugandans are coming to terms with the sad reality that the telephone network that brought low calling rates and several innovative products in the telephone market is no more. After several days of rumours that Warid Telecom Uganda was in some sort of crisis, it has now been confirmed that telecom firm has been […]

Cancer infections in Uganda increases by 70%

There is about 70% cancer disease increase in resent years in the republic of Uganda especially among children according to statistics available in the ministry of health. The increment is due to reportedly uncontrolled imported fake products that has flooded Uganda Markets from India and China. Dangerous Fake Products dumped into Uganda from China […]

Uganda has a trade imbalance with India which totals to over 900 million shillings. The minister for trade and industry Amelia Kyabadde says although government has tried to put in place strategies to correct the trade imbalance little has been achieved. She says, this situation must be reversed through creating more textiles and promoting agro- […]

Africa Scholarship Scheme: During the India Africa Forum Summit held in New Delhi in April 2008, the Hon’ble Prime Minister of India had announced Government of India’s initiative to enhance the academic opportunities for students from African countries by way of increasing the number of Scholarships for them to pursue Undergraduate, Postgraduate and higher studies […]

Scholarships for African Students in India

India to setup institute to promote trade with Uganda

India in partnership with government of Uganda is to setup an institute called India African institute of trade in Uganda to promote trade between Uganda and India. Speaking to journalists in Kampala the director of foreign trade Thomas says the knowledge base centre will equip Ugandans with entrepreneur skills and bring out international business and […]